Volunteer in one of these world-class projects:

Visit our site for more details - the journey of a lifetime starts there!

This program is no longer offered. View more programs from UBELONG. 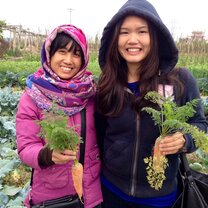 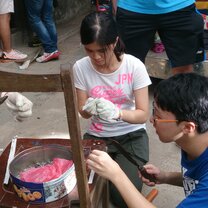 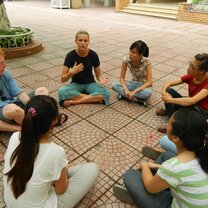 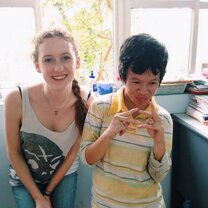 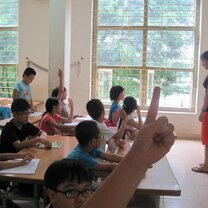 Volunteer in Vietnam | Most Affordable Projects Starting From $500

Make a REAL difference in Vietnam with Love Volunteers!

Affordable Volunteer Programs in Vietnam from $400

I travelled with Ubelong to Hanoi for a month, they were extremely helpful in preparing me for my trip, with amazing communication and organisation all the way to my volunteer house. I was put at ease straight away and never felt that things would go wrong, and they didn't! The most affordable and professional volunteer org by a mile, I will definitely use them again, as I had the most unforgettable experience in Hanoi! Amazing food, people and culture! I miss the heat!

What would you improve about this program?
No suggestions, their info pack is very good!
2 people found this review helpful.
Helpful 

Thanks UBELONG! I had such a wondering and unforgettable volunteer experience in Hanoi, Vietnam! My three-week project was to teach elementary students English. The class size was about 60, which was a lot bigger than I expected. When I first started teaching Grade 1 students, I found them very difficult to teach. Their vocabulary was very limited even in their native language. It also didn’t help that I did not understand Vietnamese, so I could not understand what they wanted to say. Coming in with very little experience in teaching, I found it difficult to communicate with them or understand their behaviour. But after a few classes, I found some ways to talk to them. For example, I drew pictures, used my body language and used simpler words to communicate with my students. This helped the school children understand me a lot better than before! The locals I met were very warm and friendly. Most Vietnamese people that I met outside of the school didn’t speak much English, but they knew that smile is a universal language. They always smiled at me and tried to talk to me and help me, which really made me feel welcomed in this country! On the weekend, I usually went outside of Hanoi with other volunteers to explore the beautiful nature. Overall, I had an amazing experience because of the great volunteer organization, local supporters, other volunteers and my students!

What would you improve about this program?
The food and the living condition could be better in the volunteer house.
4 people found this review helpful.
Helpful 

I chose UBELONG from a wide range of options for volunteer projects abroad. I was convinced by their common sense approach, with no attempt to make the project sound too good to be true. Honesty about some of the challenges, as well as the opportunities made UBELONG the obvious choice. The back-up and support from Barbara was also a factor. Further, UBELONG make you work for the opportunity, and that in itself makes it more valuable. I chose to become a volunteer because I wanted to help and to have a new and challenging experience.

What would you improve about this program?
option for a single room

UBELONG and especially my mentor Bárbara have been a great support during the preparation phase and during the time I spent on site. I felt perfectly prepared and always in good hands knowing that I could aks all the questions I havae. I would definitely recommend UBELONG to other future volunteers as an experienced and serious organization which is offering valuable projects for the smallest reward.

What would you improve about this program?
As much as possible information about the project are requiered to prepare yourself the best way you can. What age the children have, how is their knowledge, what kind of material is given.
2 people found this review helpful.
Helpful 

UBELONG is a reliable and professional organization. It definitely lives up to its reputation. My very friendly UBELONG mentor, Barbara was always prompt to help me. To everyone who is interested in volunteering, please don't be afraid to contact the organization. You may discover a whole new side of yourself through a volunteer experience with UBELONG.

UBELONG is the only organization I came across that clearly puts the needs of the local programs they support ahead of their own bottom line. Unlike other programs, UBELONG's fees are extremely reasonable and their internal support system is second to none! There was never a moment that I didn't feel completely supported prior to my trip or while I was with my local organization in Vietnam. UBELONG sticks to their founding principals in everything that they do and it gives me great pride to know I worked with such a wonderful organization. UBELONG is truly the real deal.

What would you improve about this program?
Honestly, for the specific role that UBELONG played in my experience, there isn't anything I would need to change. For a new experience like this the most important things to me were communication and diversity of programs, and UBELONG met or exceeded my expectations in both fields (and others...) time and again.
2 people found this review helpful.
Helpful 

Volunteering with UBELONG is easy and fun! I've had one of the best experiences in my life and I wished I stayed in my program for a longer time. Daily life presented an exciting challenge as the culture and language are vastly different than my own. However, that is part of what makes the experience great as you get to immerse yourself in an entirely different environment.

UBELONG provided with the tools to embark on my first international experience in a country very unlike my own so I could go out and find what we have in common. I am truly changed for the better because of my stay in Vietnam and all of the serendipitous things that happened along the way.

Should I be able to speak Vietnameese?

Should I bring toiletries with me or buy them there?

You should bring some if there's particular things (shower gel, etc )you like from home... as it's always nice to bring some small reminders!! Wetwipes are key, and some handsanitiser, but its a very clean country.. But there will be supermarkets etc so don't panic! Just dont bring too many clothes( only bring plain clothes) so you have more room for souveneirs, as they are so cheap over there if...

What is the one thing you realized you needed to bring?

Wet wipes are the best travel tool. Good for wiping your face after a long sweaty day, wiping your hands before eating if you don't have a sink or access to fresh water, and usable as toilet paper - just don't flush it! And don't count on local preferences for things like sunscreen and bug spray, you may be sorely disappointed. Don't bother bringing an umbrella, or even a fancy raincoat. Plastic...

How old is the minimum age to join this program?

Hi Cyndy, the minimum age is 18, unless you are accompanied by a parent/guardian.

By Mallory Meiser on January 11, 2016
View All Questions

Program
Volunteer in Vietnam: Most Affordable & Real Impact!
Jennifer is 25 years old with a long-standing interest in international volunteering. She grew up in the San Francisco Bay Area and graduated from college at Harvey Mudd, in Claremont, CA, with a degree in biochemistry in 2008. Jennifer is currently attending the Yale School of Public Health, graduating in 2013.

Morning: After a leisurely breakfast of banh mi with peanut butter and fruit, with my housemates trickling in and out of our common dining area, and a refreshing cool shower, I'd head off around 9:30 on my rented motorbike for work. By bus I lived about an hour away, on a bicycle, about 30 minutes, and on motorbike, about 15 minutes. Once a week I'd go an hour later, after my Vietnamese lesson, which was provided free of charge by a local volunteer. I worked in a small office with 4 other women, 3 Vietnamese and 1 American expat. I worked in the research department of a local public health organization, and primarily assisted with writing reports.

Afternoon: At about noon, my little office would get a phone call that it was time to head upstairs for lunch with the rest of the organization. We almost always ate together with the rest of the company in the conference room, but on special occasions we went out to both small and large local restaurants. 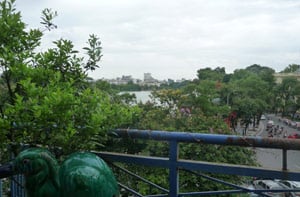 After lunch, the other expat and I would go and get Vietnamese coffee at one of the local shops, then return to the office for several more hours of work. At about 5:30, I headed home through the traffic of Hanoi on my bike.

Evening: After getting home, I usually had a few minutes of rest in the air conditioned common room, and then would eat dinner with the rest of my housemates. We then would either wander down the road for a drink at a bar in our little village, watch TV, play card games, or work on our respective projects.

On the weekends we either took trips to other areas of Vietnam, such as Sapa or Halong Bay, or we would stay at a favorite hostel in the Old Quarter and enjoyed going out for dinner, dancing, and live music.

Highlights: The highlight of my volunteer experience probably happened the first weekend, but it is exemplary of the general interactions I had with the organization I was with. The first day that I was introduced to my volunteer organization, I was told that they were going on a company retreat to celebrate the completion of a big project, and although I didn't yet know them or have any involvement in the project, they invited me to join them and provided all of the food and lodging for the trip, and plenty of alcohol!

On Saturday we took a group walk through the nearby jungle area, saw deer and monkeys and a beautiful lake full of pink lotus flowers. During that weekend they introduced me to the Vietnamese ways of cutting back and relaxing, and I took back the drinking games to my housemates (other volunteers) and still share it with friends back home. 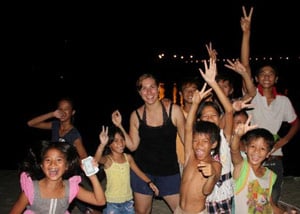 After I finished my volunteer placement, I took a two week trip with a couple of my housemates from Hanoi to Ho Chi Minh City. We stopped at several of the major tourist destinations along the way and rented motorbikes at several of them. When we stopped in Hoi An, we spent only an evening in Hoi An itself, then took our rented bikes and rode up over the Hai Van pass (of Top Gear Vietnam fame) to an isolated, island-like stretch of beach a couple hours north called Lang Co. We had initially planned to spend only one night in Lang Co, but it was so beautiful and had such a wonderful local feel that we decided to stay a second night.

We woke early the first morning to watch the sunrise over the South China Sea and played one evening with some of the local children. On our return trip to Hoi An we stopped at a place called Suoi Voi, or Elephant Springs, and spent a few hours splashing in the cool mountain spring water with other Vietnamese visitors.

Most Affordable - Trusted by Thousands - Real Impact Booking group volunteer programs only. - Pick from 100+ projects in education, caregiving, conservation, medical and more - Go to Africa, Asia & Latin America - Go 1 week to 6 months and start any week of the year - Fees from $175 for a 1 week placement - without compromising safety or impact... END_OF_DOCUMENT_TOKEN_TO_BE_REPLACED 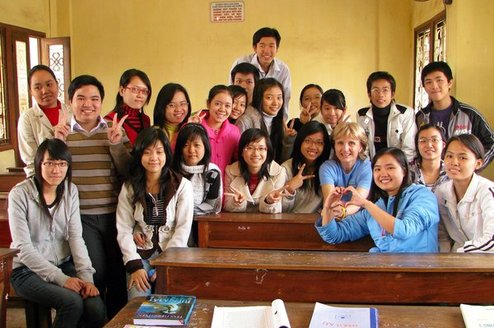 Make a Genuine Difference in Vietnam as a Volunteer

Vietnam
8.86 •7 reviews
Join Global Volunteers for one to two weeks in Vietnam as a volunteer...
View Program 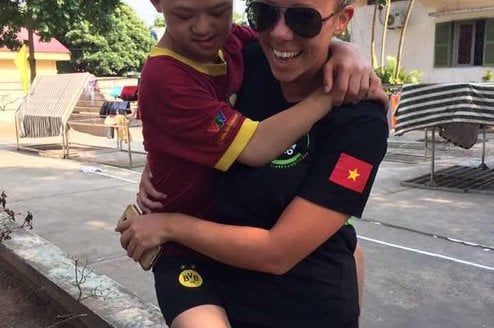 Vietnam
9.14 •7 reviews
The centre located in Ba Vi, Hanoi that is supported by our partner...
View Program