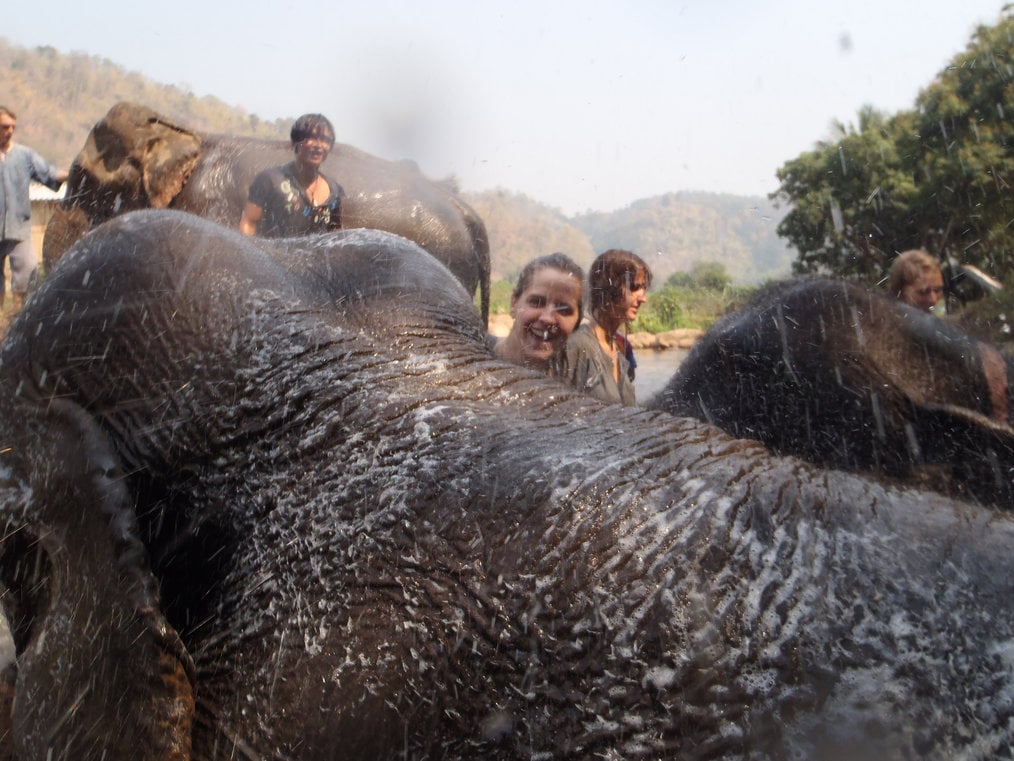 Jon and I sat, coffee cups in hand, in front of my computer on our porch in San Francisco, as we talked over Skype with our program coordinator, Megan, at Greenheart Travel. Though we were still a world away from our volunteer placement working with wild elephant conservation in Sri Lanka, it was in that moment the reality of what we had signed ourselves up began to sink in.

"You'll spend your mornings transecting," Megan started, "which means, you'll be inspecting elephant poop to see what they've eaten. In the afternoons, you'll be in this tree hut -- it's really pretty -- to look out for elephants and record notes on their behavior."

"Well, half of that sounds great," I jokingly said to Jon as we laughed about the idea of spending two weeks poking at elephant dung while working with wild elephants with SLWCS.

However, volunteering with elephants is no laughing matter. When done right, it can have a huge impact on elephant and human communities in Africa and Asia. Sadly, not every volunteer project working with elephants has a positive impact, and the work itself might not be a week's worth of splashing around with baby elephants in a river. So, in this article, I want to provide some insider tips on volunteering abroad with elephants by talking about:

By the end of this article, you should be able to properly distinguish between a good project and a bad one, and properly prepare yourself for volunteering with elephants abroad.

How Volunteer Projects Abroad Help Elephants: What's the Cause? 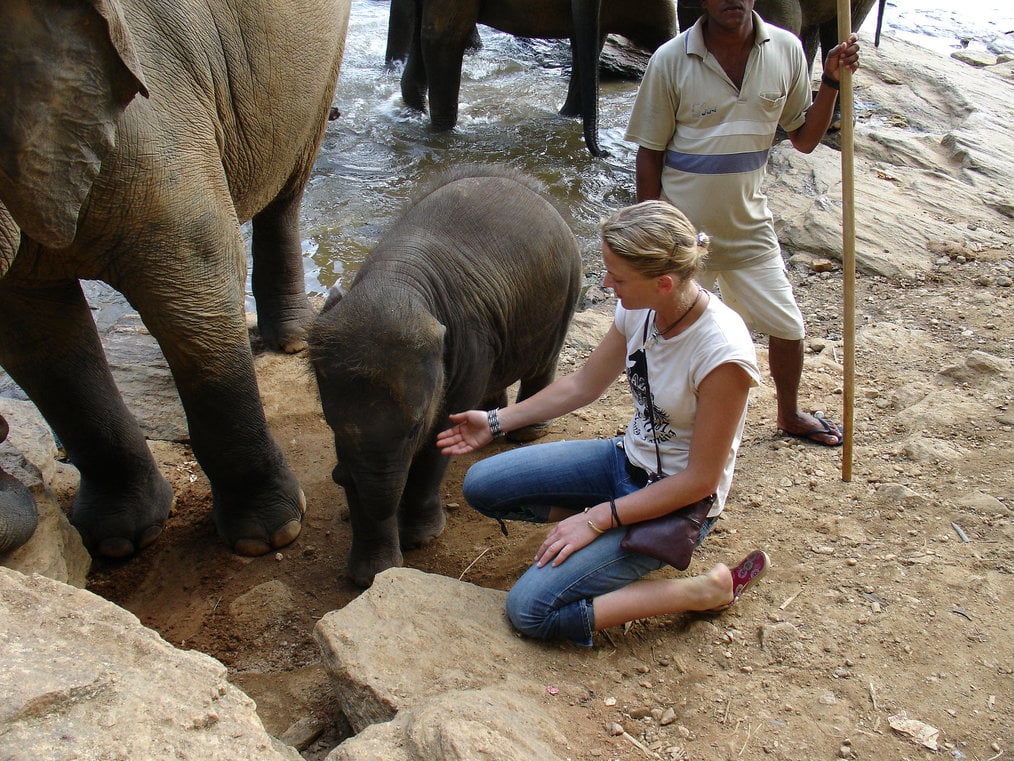 Before setting out to volunteer with elephants in Asia, I assumed that volunteering with elephants mostly involved taking care of orphaned elephants whose parents had been killed by poachers. I thought that most volunteers worked in elephant sanctuaries / orphanages. I definitely didn't know the full story. Turns out, elephant conservation is far more complex than that and there are several reasons and ways to help them:

Basically, humans move into elephant zones (often as a result of overpopulation or government relocation programs). Elephants keep doing what they've always done, hanging out in the area eating, sleeping, and well, living.

Unfortunately, the new human establishments are in the way, and elephants will sometimes destroy property, crops, and lives. As a result, the humans kill or injure elephants, diminishing natural populations, and orphaning young elephants.

In Sri Lanka and other predominantly Buddhist areas, they don't necessarily want to kill the elephants, but they also don't have any other ways of keeping the elephants out of their fields and villages. They want to keep their families safe. Conservation projects seek to educate local populations, preserve habitats, and keep elephants away from villages as a way to solve this problem.

Elephants being kept captive for tourists

Tourists love elephants (who wouldn't?) and often, they want to see them up close, ride them, and play with them. As a result, there are quite a few not-so-ethical tourist traps out there that keep elephants unnecessarily in captivity -- sometimes posing as an elephant orphanage -- so as to make money off of unsuspecting tourists. Again, elephant conservationists want to end this.

Some orphanages are tourist scams

"The elephant sanctuaries, like Pinnawala, that exist in Sri Lanka used to have a purpose, but they don't really need them anymore," said Ravi, one of the founders of SLWCS, in our first week in Sri Lanka. Apparently, orphaned elephants had been taken in, but never re-released into the wild. Currently, those elephant sanctuaries continue to exist to bring in money from tourists who want to visit and ride / wash / or play with the elephants.

Basically, if you see a project or tourist attraction that lets you ride elephants, don't do it. Training elephants to have human riders involves abusive techniques (which I won't get into here, but The Dodo has a good list of reasons if you want to learn more) and ultimately harm more than they help the elephants.

What Do You Do When You Volunteer With Elephants? 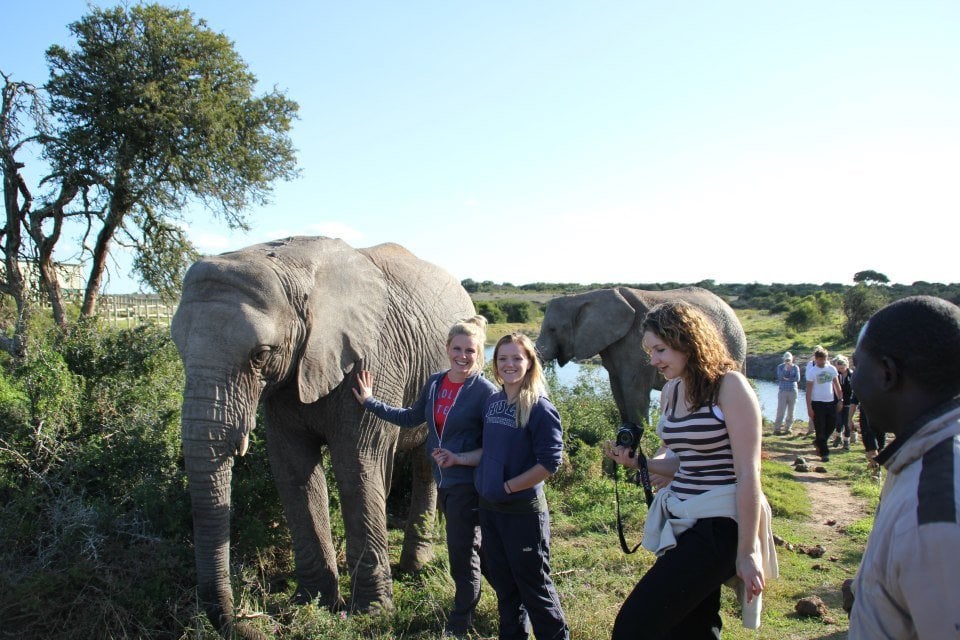 There are a lot of creative initiatives that elephant conservation organizations are using to help end poaching, human-elephant conflicts, and preserve wild elephant populations in both Africa and Asia. If you volunteer with one of these projects, you'll likely work with:

As a volunteer, you'd likely be working to achieve one of these initiatives. Sometimes this can be tricky if you don't speak the local language (especially when it comes to education) or can't volunteer for more than a few weeks.

That was exactly the scenario that Jon and I found ourselves in, so most of our activities revolved around data collection, observing elephant habitats, and recording their behavior. Regardless, the day to day of volunteering with elephants, particularly wild ones, might involve:

Though helpful, one of the biggest ways we as volunteers can help elephant populations abroad is simply by learning about it as I did with Greenheart Travel's Elephant Conservation program. Marking the diameter of elephant poo is a necessary (though not the most glamorous...) task that needs to get done, but truly understanding the complexity of wildlife preservation and gaining a holistic understanding of the issue is 100 times more effective in positively impacting human behavior.

Personally, I may have taken only a page or so of notes, but I also came away from this experience knowing to never support elephant rides and will tell anyone who cares to listen about it (like I just did here... clever, right?). Education's powerful -- but you knew that already.

What to Look For When Choosing a Program 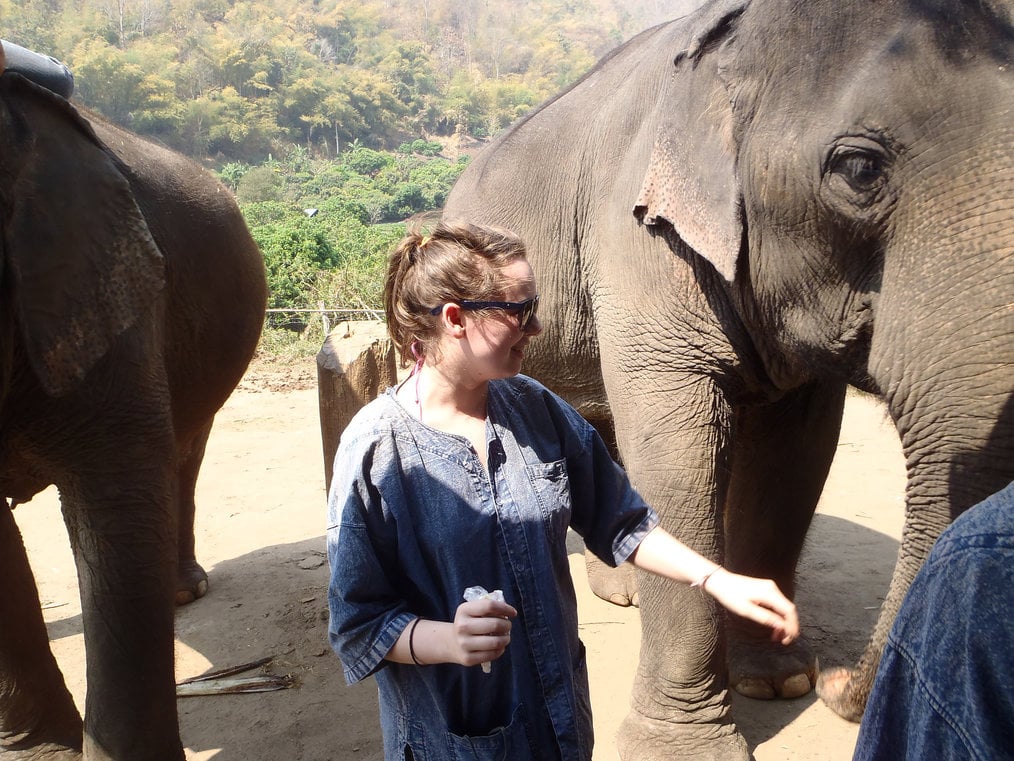 All too often, our concerns of cost and convenience come before responsible actions when we're figuring out which organization to volunteer with. Yes, you'll want to choose a program you can actually afford and show up for, but that should be secondary to considerations like reputation, involvement of the host community, sustainability, and safety.

It's even better if the host organization regularly involves local members and has a plan to sustainably run their project without the support of volunteers (which is, admittedly tricky and difficult for many grassroots organizations who are strapped for funding).

On your side, you'll also want to ask what the program does to assure the safety of the volunteers. Though cute, elephants are still wild animals and, particularly with male elephants, not always predictable. You'll want to be trained and know that you're with staff who are trained on basic safety precautions.

Once all of those check off, then think about logistics. However, if you find a great program but the dates don't work, ask if you can join anyway. A lot of programs are willing to be flexible with dates.

Where Can You Volunteer With Elephants?

If you want to work with elephants, you really only have two continents to choose from: Africa and Asia. Within the two, some popular destinations include the ones listed below. If you're interested in looking at programs or reading more about volunteering in that country, follow the link to our program listings pages. We also have an article that breaks down some of the best countries for volunteering with elephants and what makes each one special.

Helpful Resources for Volunteering with Elephants

I went over the basic and most essential information you'll need to volunteer with elephants abroad, but if you're interested in even further preparing yourself for the trip, or are interested in learning more about elephant conservation abroad, below are some great resources to further help you:

Also, a few noteworthy parks in Southeast Asia who have been noted for having ethical interactions with (non-wild) elephants:

Will You Volunteer With Elephants?

Are you planning a trip to volunteer abroad with elephants? Where are you going, and what will you be doing? What inspired you to go? Let us know in the comments below.

Where to Volunteer Abroad for Cheap in 2021